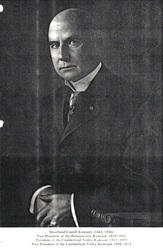 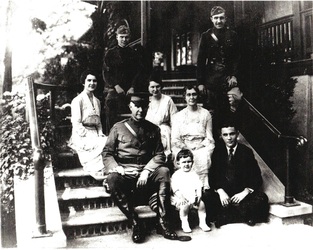 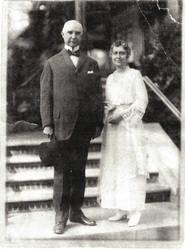 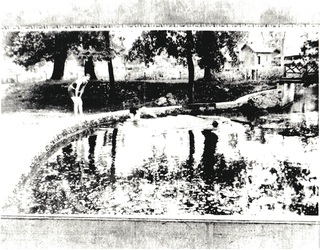 History of the Inn

The Ragged Edge was built in 1900 - 1901 for Col. Moorhead Kennedy. The architect was Frank Furness of Philadelphia. This house was the Kennedy's summer home that you visited by horse and buggy. Colonel Kennedy had a rail spur brought to the opposite side of the creek from the house. A small depot was built there and a walking bridge and stone path brought guest across the creek and to the rear of the home. The rail bed and 2 iron bridges with the rails removed are still there. The mill work was done by a Philadelphia company. The drawings were very precise and contained the type, size, and method of absolutely everything in the house. The contract for the fireplaces stated that if the draw wasn’t perfect the fireplaces would have to be torn out and rebuilt. A large addition and electric was added to the house in 1913. The addition had to be added in such a way that it looked original. Ragged Edge became the largest residence in Franklin County.

Moorhead loved the Ragged Edge and hosted annual stag parties on a Saturday in early October. Guest list grew to over 200 with time. He entertained executives from railroads, the Governors of Pennsylvania and Maryland, US Senators, bankers from New York and Philadelphia, heads of corporations who the railroad had dealings with, PA Supreme Court Justices, Corporate Attorneys, University Presidents, and of course prominent clergymen. Top caterers from Philadelphia provided the food.

The Kennedy’s enjoyed entertaining and Ragged Edge was known for it’s lavish parties. There were evening concerts and dances and there are still a few people around who remember them. New York society was entertained here as well as General Pershing, Brigadier General Atterbury and French General Foch.

What is remarkable was the means of transporting the guest. The spur at the rear of Ragged Edge enabled the guest to arrive in style. They would stop at the depot, walk across the bridge and follow the rock trail to the mansion. The Cumberland Valley Railroad was known as the first railroad to have sleeper cars and they were famous as they served as sleeping quarters for the many guest at Ragged Edge.

The Kennedy’s used Ragged Edge as a farm and by some accounts there were as many as 1,000 acres. Horses, geese and peacocks were among the many animals kept at Ragged Edge. There were beautiful gardens with white hyacinths and grape arbors everywhere.  There were orchards and the Kennedy’s were strong supporters of Pennsylvania’s fruit culture. The house across the road served as the farmhouse and it is there that Mr. Kennedy had a portion of the creek hand dug so he could divert the water from the creek into a concrete swimming pool. There was a mechanism used to control the water and it can still be seen today.

Colonel Moorhead Cowell Kennedy was a railroad official and active in World War 1. Among the railroad men of eastern Pennsylvania there are few figures more outstanding than Colonel Moorhead Cowell Kennedy. He was President of the Cumberland Valley Railroad and Vice-President of the Pennsylvania Railroad Company. In addition to his long career as a railroad official, Colonel Kennedy has a record of most honorable service in France and England during WW1.